I’ve had an impossible travel schedule this spring, so I have just one post for May/June. I have been trying to use Twitter for more regular updates. I hope you’ll follow me there @ktulrich.

How to be less ignorant about China
I’ve traveled to China a few times, including twice this spring. I really enjoy China, and if you have not been, I highly recommend you go. On my last trip, an investment of eight hours of my time transformed my experience, making me feel as if a veil had been lifted. I highly recommend you do these two things before you go — requiring about four hours each.

a. Learn about Chinese characters
Chinese language, both written and spoken, has always seemed to me impossibly hard to figure out. Before this trip, I bought the beautiful book Chineasy. The title is cute, but don’t be confused. You won’t learn to read and speak Chinese. However, the author, ShaoLan Hsueh,  does a fantastic job of using images to create visual associations between a hundred or so Chinese characters and their meanings. She mostly focuses on the radicals — the set of foundational elements from which more complex characters are typically composed. For instance, the Chinese character for “big” is drawn as a little man holding his arms wide out and saying “it was this big.” After seeing that image once, I’ll never forget what that character means. You can absorb much of the book in about four hours — a fraction of the flight time to China for most people. If you think at all visually, you will find that you can then make sense of a lot of the written Chinese you see in street signs and on buildings. I found the investment of time in learning the radicals deeply rewarding — it just made me feel much less ignorant about the language, even though I know that learning to be functionally literate in Chinese would take hundreds or thousands of hours, not four. 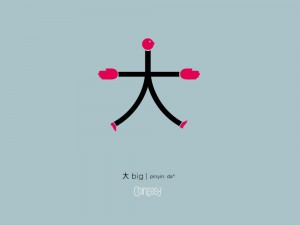 An example from the book Chineasy — the character for big. Imagine the guy saying “it was this big.”

b. Learn about the development of modern China
Civilization on the Chinese subcontinent goes back millennia. However, the most recent few centuries are amazingly interesting and relevant to what you see in China today. I read a book called Modern China: A Very Short Introduction. (These “very short” books are a series from Oxford University Press — not all that short, and not to be confused with the “for dummies” books. They have a pretty scholarly tone.) It takes about four hours to read the book, and for me it was a page turner. You’ve heard of various dynasties, the Cultural Revolution, the Long Walk, and characters like Mao Zedong, Deng Xiaopeng, and Chiang Kai-Shek, but do you really know how they fit together and what happened before and after Mao? Modern China is so concise that I think reading it is a good investment for anyone visiting China.

Coursera – Fourth Run
Thanks to all of you who participated in the fourth session of my massively open on-line course Design: Creation of Artifacts in Society, which just wrapped up. I can’t believe it’s been almost two years since it first ran. It’s long enough ago that when I make an update video and insert it in the flow, I worry that participants will notice a lot more gray hair (the price of wisdom, I suppose). We’ve learned so much at Penn about how to do these courses that I’m really feeling the need to go back and do the whole thing again. Another project for the list.