I was lucky to speak with Carey Smith this past week about his 15-year-old company Big Ass Fans. He’s been super successful, having bootstrapped the company to about $250 million per year in revenue. He has some great stories, but also some nice insights about how to build a company to last. The interview is here, with the origin of the name at 8:55 in the interview.

The company staff clearly know how to have fun. See also their highly amusing videos on YouTube. This one is a compilation of real “hate voicemail” about their name.

Every January and February for more than two decades I’ve sat through a bunch of “job talks” by aspiring faculty candidates. The candidate usually visits campus for a full day and sometime during the day gives a 60-90 minute talk to a seminar audience, usually about 15-30 professors and graduate students at the host institution. The talk is typically the most critical component of the day. Here is a little rant about three pretty obvious elements many candidates got wrong this year (and every year).

Pose a question. Answer it. In my opinion the best scholarly research provides a convincing answer to a question we care about. It’s that simple. The first sentence out of your mouth should be “My research answers the question of …” You can then spend 5 or 10 minutes showing us why that question is interesting and important. Then, the body of your talk provides the answer, convincing us that you chose a good strategy and that your findings are likely valid. You conclude by reminding us of the question and your answer. Most talks poorly received this year simply failed to pose a good question and/or failed to answer the question posed.

End on time. Be absolutely sure you know exactly how many minutes you have from start to finish, and the time at which you must be done. Ending early is no problem at all. Running over makes everyone anxious, and will be a huge inconvenience for those who have to teach right afterwards. Be prepared to adapt flexibly to hit your end time. Remember, most professors like the sound of their own voices, so you’ll get lots of questions if you’ve engaged your audience with a good question. So, be prepared to jettison the explanation of some supporting details if necessary.

Give one talk. I would say almost half of our candidates this year made the critical error of trying to give more than one talk. The deadly moment comes when they have finished their first talk and then say “I have a few minutes so I’m going to tell you about a second paper.” Never, ever do that. Don’t even put up a slide that shows how your talk fits into your portfolio. (If you must, then do that first; never at the end.) Like a good book or movie, a job talk should follow a narrative arc. You start with a question, you create tension, and then you resolve that tension. Do that well. Once.

While I’m at it, let me mention that in one case a candidate was immediately eliminated from consideration when he/she checked email on a mobile device during a one-on-one interview with a junior professor who apparently he/she didn’t consider important. Really.

By now I’ve annoyed many of you personally with my efforts to learn Chinese. (To my Chinese-speaking friends, I’m especially sorry for making you suffer!) However, I’m as excited about this effort as ever. It’s so fun.

One of my Chinese friends has nearly native colloquial English skills. She told me that when she was in college in China she watched the movie Scent of a Woman repeatedly until she could say every line perfectly in English. She found some Chinese movies for me on YouTube with Chinese and English subtitles. Here is an example with the English title Say Yes! (101次求婚 in Chinese) and featuring the wildly popular actor Huang Bo  and the Taiwanese model-turned-actress Lin Chi-ling. 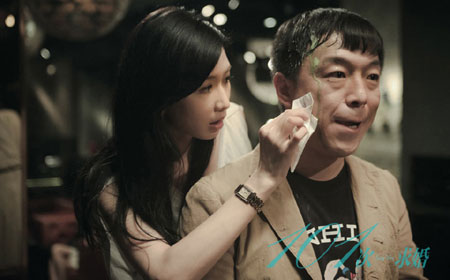 Even if you are not learning Chinese, you may find mainstream Chinese movies both entertaining and instructive. It’s interesting to learn what the mainstream Chinese moviegoer apparently finds funny. Much of the humor is universal, but there is a certain mix of the serious and slapstick that strikes me as quite distinctive. It surprised me a little bit.

If you are learning Chinese, don’t despair. This is full-speed Mandarin, and without the subtitles I find I can catch every 20th word or so on the first pass. However, I’ve been watching the same scenes a dozen or so times repeatedly while cooking dinner, and I find that eventually I can follow the dialogue pretty well. There are enough set phrases in the typical back and forth that this effort feels really useful as a way to increase comprehension of ordinary language.

Some Chinese films (particularly documentaries) include a lot of dialogue in a regional dialect. See, for instance, China Heavyweight a film about recruiting aspiring boxers in southwestern Sichuan province. Enjoy the movie, but forget about using it as a learning tool for Mandarin. The dialect is just too different from Mandarin (at least to me).